Well, we talked about it on the episode with Johnny Mundo and here is the video for you to see this madness for yourself.

Episode 84 features our 60 minute+ interview with Sick Nick Mondo and as promised you can peep his amazing film trailer here: 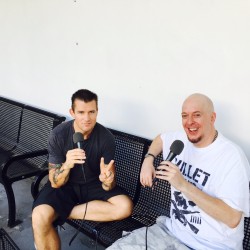 Brought to you by Dignified Bastard where you can get classic SFT era NYHC re-issues on Vinyl and CD, plus Kevin Gill Show stickers, shirts, and more!!!

Imagine stepping into the concert poster you had on your wall as a little kid, and never emerging from your dream, BUT still evolving and improving yourself for the 2 decades you’ve been living the dream..

Welcome to the world of Adam Blake, an inspiring and positive musician and person who has a new album out this FRIDAY 10/9/15 with his band ‪H2o.  It’s called USE YOUR VOICE and you need to pick it up.  H20 is a band made of unique personalities and lifestyles, and they have so much  respect for the roots,  each other,  and you! Plus they got that PMA at  levels rarely seen amongst mere mortals.  The album is also premiering all this week on Tim Timebomb’s show on Faction on Sirius Satellite radio with Adam, Toby, and Rusty talking about each song with Tim!

Let’s start off this companion blog to episode 72 with some awesome videos to show you what Adam and his music is all about.

H2o has a lot of great songs, and this one is quite possibly my all time favorite. Spotlight on Adam’s groovy basslines, Toby’s sincere lyrics, and star studded guest friend appearances by Lou Koller (Sick of It All) and Matt Skiba (Alkaline Trio / Blink 182 ) and an absolutely brilliant intro by Michael Rappaport
WHAT HAPPENED? – MUSIC VIDEO

Here’s some footage I FILMED that we talk about in the episode. Imagine RANCID/H2o playing at a sold out Warfield in San Francisco.. Then imagine CM PUNK coming out to do guest vocals with the fellas, and ya boy KG captures the moment!

Another great song video is from the same Album as “What Happened” and it is fun, frantic, and packed with friends. The essence of hardcore and punk rock.

Nothing To Prove – VIDEO

This song is an H20 Anthem. I chose this one because it’s on some random Tour date in Salt Lake City, but Travis Barker stops by to be guest drummer for a few songs.

ONE LIVE ONE CHANCE – TRAVIS BARKER

The true attitude of REAL hardcore and punk rock is impossible to define or duplicate. But real recognize real. I get chills watching stuff like this:

Let’s close it out with the CM PUNK RIOT AT THE COW PALACE footage that I also filmed, that Adam and I discuss on the episode:

At the end of the day, I love H2o. I see them live whenever I can, and their music is a regular part of my life.   They have always been friends to me and looked out for me, and I don’t forget that.  #FTTW #MFLOFMLF #LYD #PMA

One of my favorite parts of the Kevin Gill Show, is trying to deliver you interesting, inspiring, and fun conversations from different perspectives and viewpoints in the world… The goal is always to make the conversation as interesting to a die hard fan, as it is to someone who has never/seen heard the creative output of the guest and the early feedback I’ve gotten is that this is the BEST episode of the Kevin Gill Show so far. What do you think? Holla at us on Twitter @OGKevinGill or @KevinGillShow or comment here, or on our Facebook.

Also, we do this one listener at a time.. So talk about us on Social Media to spread the word, and RATE AND REVIEW us on ITUNES AND STITCHER, FOLLOW US ON SOUNDCLOUD!

Fun fact. When I started this podcast I planned to do a little blog about each episode with links to things we talked about and etc… I was like I’ll get caught up after a few episodes… and then… for 70 episodes I continued on blog free…. BUT NOW I AM AM BACK IN THE BLOG-OSPHERE!!!

Thanks for listening. Sincerely.

First I gotta give Vinnie Stigma and Agnostic Front mad respect. True Trailblazers and pioneers!! As a kid I started to get into thrash metal because it was the most aggressive thing I ever heard at that time.

I started to watch Headbangers Ball (12-3am on MTV once a week, back in the day) and the show was inexplicably jam packed with  Bullet Boyz, and Enuff Z Nuff nonsense I had to suffer through to get to see an Anthrax video, or a Suicidal Tendencies video…and then one night… in the final moments of the show… around 2:57 am when almost everyone was already in bed… they played this video:

*Bonus points for spotting CRAIG AHEAD on bass! He’s on a very popular episode in our back catalog!

This whole thing kinda scared me. But it also intrigued the hell out of me.   What was this place? What the fuck was going on?  How sick does your band have to be to have it’s own anthem?

These questions would be answered a few months later when against the wishes of family members I made my first pilgrimage to CBGB’s for a New York Hard Core Sunday Matinee and my life has never been the same.

I didn’t know ANYBODY. I was wearing an Anarchy shirt from a shady head shop on Main Street Flushing, and  I figured there was a decent chance I would get beaten up or something. But instead I just was respectful and open minded and had my mind blown by Sick Of It All.

Acceptance, brotherhood, and pure unbridled reality in (at that time) one of the most dangerous parts of NYC.. The Lower East Side… But I digress…….

I wanted to share a few things discussed in the episode…

First Off, we talk about crazy covers of the classic Agnostic Front song “Gotta Go”.

And finally, the main event of cover songs: enjoy the 100% real, Russian, and fresh to death “Russian” Cover of Gotta Go with a MUST SEE MUSIC VIDEO: You heard us do play by play on it, now watch the brilliance!!!!
Amazing Russian Agnostic Front Cover With Video

We also talked about Vinnie’s other band… STIGMA!!! I love this band and their records!!! here’s a video from them! NEW YORK BLOOD!!!! Gallo in effect here too!!
STIGMA – NEW YORK BLOOD VIDEO

Alright fam! As always, PLEASE write a review for the show on ITUNES or Stitcher, and please follow us on Soundcloud!

Support and buy a shirt! a sticker! a pin! a 12″ record, a CD, a DVD, a poster or more from Dignified Bastard!

Support the show on PATREON

Spread the word! We do this one listener at a time.

1/9/14 is an exciting day for me, as I have joined the ranks of esteemed trailblazers like Colt Cabana and Marty DeRosa as a Podcaster!!   I hope you’ll enjoy this in depth Interview with Andrew WK, and please rest assured the show will ONLY GET BETTER..  My goal is to be here every Wednesday with a brand new episode for you!!

Your support means the world to me, and I hope you will tell your friends! Spread the word! Your in on the ground floor of what I hope will become an important and notable podcast.

I wanted to include these links to some of the Hitman 2 stuff I spoke about with Andrew during the podcast.

Here’s some footage of Andrew as a playable character in Backyard Wrestling 2: There Goes The Neighborhood!

More to come! Stay Frosty!  Please Send in your thoughts and feedback via the contact form or on Twitter!!!!!